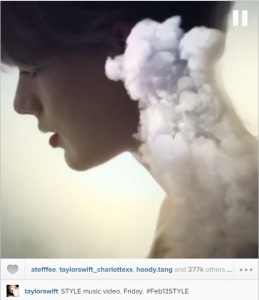 It was an urge, a necessity, take Waylon’s hand and walk with him to the cliff. He was magic and power and relentless and she wanted to orbit him like a planet or moon. She had since she met him at sixteen years old, and now that he was standing in front of her after such a long, painful absence, she couldn’t resist.

She felt herself fade with each step she took, reduced to a watermark, a memory. The cliff was a silhouette in the sunset, causing the clouds and the water that reflected the sky to look more heavenly with its golds, purples, and whites. Waylon only notice Helena and caused her thoughts to falter by grazing his thumb against the inside of her hand.

A good girl would not have such a reckless friend.

But if she did, the friend would not be a boy.

But by chance it did happen, the girl definitely wouldn’t fall in love with the boy, certainly not after the boy told her what he was.

Especially not after the boy told her what he did.

But even if she did, good girls would not forgive him his past, but would forget her feelings for him, shun him, and keep herself pure.

Five years had passed. Five years of convincing herself that Waylon was a dream—a wonderful, complicated dream that had been the high point in her very good life. On the day he came for her, Helena was leading her very good life. She had graduated college in Public Relations, she’d racked up hundreds of volunteer hours, she held a job at Children’s Services, and she fostered stray cats until homes were found for them. She was everything she was expected to be, and she wasn’t unhappy. She just wasn’t happy.

At the bus stop, she stood with her arms wrapped around her waist and she closed her eyes. Helena allowed herself this small indulgence today because it was her birthday; she remembered. Not Waylon’s look or his eyes or his smile, although those things were memorable, but Helena chose to remember the way he made her feel. So important. So alive. So complete. If Helena was honest with herself, all of the good things that she threw herself into were just attempts to replicate the way Waylon made her feel. And normally that wouldn’t bother her, but since today was her birthday, the day one is supposed to be self-aware, she remembered what life could have been.

Helena pulled Waylon to a stop before they reached the edge of the cliff and asked, “How did I get here?”

Waylon stroked her cheek and said, “I missed the way your mouth twitched when you were just about to figure out an answer to a question.”

Helena touched her lips, embarrassed, but he moved her hand and held it to his still heart. “You’re getting there.”

“I’m no longer…” The word alive wasn’t audible, but Waylon always knew what she wanted to say.

“Are you here…” to stay. Helena was afraid of this answer.

“No.” but then he smiled and said, “And neither are you.”

“Don’t send me back. Please.” Helena grasped his shirt pulling him closer. “I can’t go back now that you’re here.”

Waylon breathed deeply. “You have no idea how much that means to me.”

The sun sank lower and Helena tensed with fear and unknowing. “What do I have to do?”

“Just choose. The cliff or the land.”

Her voice climbed as high as her disbelief. “Jump from the cliff?”

“Have some faith, Lena.” Waylon’s smile was a dare. “You have to choose. Jump or turn around and walk that way.” Waylon pointed to an expanse of land that blurred the harder you tried to focus. “I can guide you through either gate, but I can only stay on the side of the one I chose.”

“And which one did you choose?”

“I can’t answer that.” He shifted feet. “Against the rules.”

“When have you ever followed the rules?” Helena asked, memories softening her face.

“Since they were the only way we could have a chance to really be together, even if it is a fifty-fifty chance.”

Waylon shut his eyes for a moment, and then nodded his head. “He’ll stop the sunset for a while, but when it begins again and before it gets fully dark, you have to choose.”

Helena tucked her hands deep in her pockets. “Okay. Who is He?”

“I can’t answer that, either.”

She lifted her chin toward the coloring clouds and said, “Well, thank you, He.”

Waylon’s expression lightened and he lifted Helena, spinning around and around. She laughed whole-hearted for the first time in five years, and they fell disoriented in the cliffs high grass, a deep breeze cleansing Helena’s numbness. She thought about asked why—why did he leave, why didn’t he love her enough to stay, why didn’t he say goodbye. But that would be a waste of time, so she told him how—how much she missed him, how he made her whole, how she wished she had more memories to pull from than the two meager years of high school.

Waylon didn’t offer an explanation. He just talked about what he thought about her boyfriend, what he thought Helena deserved in life, what he wanted to do to her for the rest of their existence.

Helena blushed and curled into Waylon’s lap and they kissed until they could no longer distinguish individual blades of grass. The sun was sinking again.

Waylon brushed the grass from her shirt. “It’s time.”

“I know.” Helena crumpled her face.

Then, she unfolded and revealed a level of peace she’d not known in her earthly life. “I was happiest when I took a risk to be with you.” Helena looked toward the cliff. “Maybe that would be the same in death.” She looked to the sky. “Do you hear that, He?” She yelled. “I choose the cliff.”

Waylon walked her to the edge hand-in-hand. She couldn’t understand his neutral expression. Had she chosen well?

They faced each other in silence. There was nothing left to say. He would take her to her chosen gate now, and he would either enter or turn away. Helena nodded and they both pushed their weight over the edge.

On the way down to the water speckled with the fading sun she heard Waylon’s voice shout. “Good choice.”

The Past is NEVER the Past