This week, I made a plan. It goes like this:

1) Make an outline that is more than just “and then THIS happens”.

2) Organize all the scenes I have so far and make them flow.

4) Write! Even if I think it sucks at the time.  KEEP GOING!

So, I set out to accomplish this plan.  I’ve been working on this for 2 years now, so I’ve not seen everything I’ve written past-wise in a while. Then I didn’t write at all during the end of the pregnancy and, come to find out, I have postpartum depression.  Don’t continue on the same story when you’re crazy, by the way.  From experience, your characters become crazy, too.  What I should have done was start a new story while I was crazy and seen where THOSE characters could go.  Oh, well, hindsight and all.  I’m getting better, by the way, which is why I could make a plan and carry it out. I might elaborate in a person post later when it’s not so fresh and I can process.

So I read what I wrote in the beginning, and boy, did it stink big dung piles.  Harsh, I know.  I was melodramatic and campy.  It was like reading a soap opera. I over-explained. I wrote multiple descriptions for EVERYTHING. Every gesture was over-dramatized.  I wanted to know when I was going to get to the plot, and I wrote the scene! 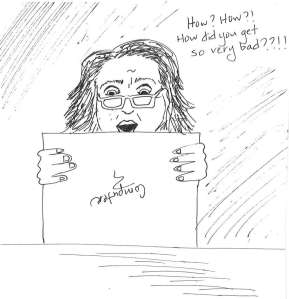 And then it came.  A light in the darkness.  A scene that showed rather than told.  A conversation that exposed just enough. A metaphor in just the right spot.  Something of which I was proud to read.

I saw a change in my writing.  Progress.  It gave me hope.  I know that what I read at first was…well…it was bad, but I also knew that I had it in me to write well and I had to write badly at first to get there.  All it took was practice.  Practice.  PRActice.  PRACTICE!

Doing what I want to do A LOT.  How’s that for gratification?

A little something about me: I like quotations.  A few words that hold a mouthful of meaning.

This one about writing applies to me:  “I don’t like to write, but I love to have written.” ~ Michael Kanin

For me, the satisfaction comes after you pour yourself on paper, sit back, and think This is good.

Gloria Steinam also laid out my feelings into a neat little package when she said, “Writing is the only thing that, when I do it, I don’t feel I should be doing something else.”

Too true, Steinam.  Too true.

One thought on “Harsh”

The Past is NEVER the Past